A trial was conducted with the Southern Poultry Research Group, Inc., in 2021 to determine the effectiveness of variable does of Orego-Stim Powder (OS) in reducing the negative effects of the coccidia E. maxima. 450 day-old male Ross chicks were assigned to five groups, with nine cages per group and ten birds per cage using a randomised complete block (Table 1). Birds were raised in Petersime style battery cages (stocking density 0.63 sq. ft/bird) in a solid-sided barn maintained under ambient humidity. On day 8, all birds except the negative control, were individually challenged via oral gavage with E. maxima (Dr Fuller of The University of Georgia strain) (75,000 oocysts per bird at 1ml dose). Body weight gain, intestinal lesion scores (Johnson and Reid, 1970), oocyst count and mortality were recorded until 28 days of age.

*All dietary supplementation was added via the mixer into the feed. 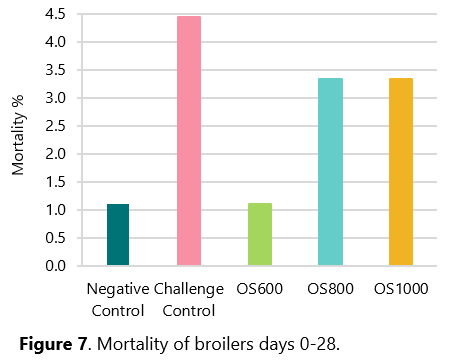 In the absence of anticoccidials, Orego-Stim Powder can help maintain bird performance during peak cycling of E. maxima, to help support in the development of natural immunity against coccidia. This is important within high stocking density and floor pen production systems where coccidiosis challenge is high and compensatory growth may not occur.